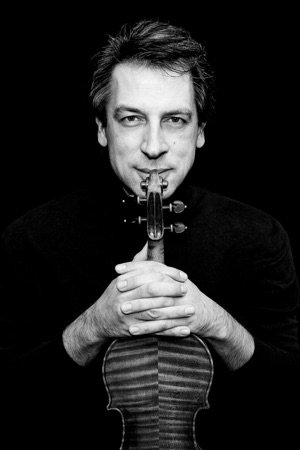 Born in Turin, Hans Liviabella comes from a family of musicians. His great-great grandfather was a student of Rossini, his great-grandfather a bandmaster, his grandfather a composer and his father a violinist. He began his violin studies with him at the age of four.

He received his concert maturity at the Giuseppe Verdi Conservatory in Milan under the direction of Christine Anderson. He continued his studies with Salvatore Accardo at the Accademia W. Stauffer in Cremona and with Dora Schwarzberg at the Musikhochschule in Vienna. While studying there, he was selected as one of the most talented students of his generation to participate in a live broadcast in Moscow dedicated to the memory of the famous Russian pedagogue Yankelevich.

After hearing Kremer play, Gidon recommended that Hans continue his training with Maya Glaserova in Moscow. He also took lessons with Stefan Gheorghiu, Franco Gulli and with the Trio di Trieste as a scholarship holder of the DeSono Society in Turin.

Hans Liviabella has played as a guest with the COE since 1992. He became a member in 2017, when Claudio Abbado invited him to join the Lucerne Festival Orchestra and the Orchestra Mozart in Bologna. He has also played with the Filarmonica della Scala as a section leader.

Hans plays first violin with Quartetto Energie Nove, an ensemble that has collaborated with Alexander Lonquich, Ivo Pogorelich, V. Mendelssohn and Julian Rachlin, among others. The quartet has performed on various radio and TV broadcasts of RTSI (Swiss Television) and regularly records new CDs (Dynamic).

With the Orchestra della Svizzera Italiana, Hans is the principal second violinist. He performs regularly with the orchestra as a soloist. Most recently, the orchestra performed Prokofiev’s Violin Concerto with Alain Lombard and recorded the premiere of Joseph Boulogne Chevalier de St. Georges Concertos op. 7 no.2. Concertos by A. Camella, Lino Liviabella and G.F. Malipier were also recorded at Forlane.