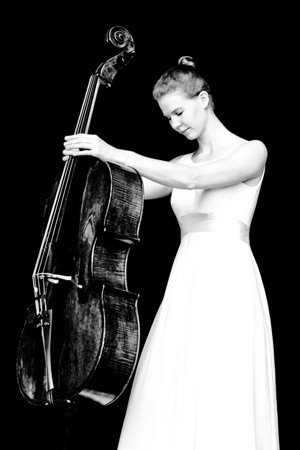 The young Dutch artist Harriet Krijgh is one of today’s most exciting and promising cellists. Her grace and expressiveness touch her audiences as soon as she is on the concert platform.

Harriet Krijgh has an exclusive recording relationship with Deutsche Grammophon since April 2018. As first result of this collaboration a new album with works by Vivaldi, recorded with the Amsterdam Sinfonietta and their leader Candida Thompson, will be released in September 2019. Her discography also comprises six discs, all released by Capriccio, featuring music by Kabalevsky, Haydn, Brahms, Rachmaninov as well as several French composers.

Harriet Krijgh is winner of numerous competitions. In 2015/2016 she was chosen as “Rising Star” of the European Concert Hall Organisation (ECHO). Succeeding Janine Jansen, she led the International Chamber Music Festival in Utrecht for two seasons. Her annual summer festival “Harriet & Friends”, which she founded in 2012 at Feistritz Castle in Austria, was extended by a winter edition for the first time in 2018.

Get all our news for the coming events…

This site uses cookies. By continuing to browse the site, you are agreeing to our use of cookies.

We may request cookies to be set on your device. We use cookies to let us know when you visit our websites, how you interact with us, to enrich your user experience, and to customize your relationship with our website.

Click on the different category headings to find out more. You can also change some of your preferences. Note that blocking some types of cookies may impact your experience on our websites and the services we are able to offer.

These cookies are strictly necessary to provide you with services available through our website and to use some of its features.

Because these cookies are strictly necessary to deliver the website, refuseing them will have impact how our site functions. You always can block or delete cookies by changing your browser settings and force blocking all cookies on this website. But this will always prompt you to accept/refuse cookies when revisiting our site.

We fully respect if you want to refuse cookies but to avoid asking you again and again kindly allow us to store a cookie for that. You are free to opt out any time or opt in for other cookies to get a better experience. If you refuse cookies we will remove all set cookies in our domain.

We provide you with a list of stored cookies on your computer in our domain so you can check what we stored. Due to security reasons we are not able to show or modify cookies from other domains. You can check these in your browser security settings.

We also use different external services like Google Webfonts, Google Maps, and external Video providers. Since these providers may collect personal data like your IP address we allow you to block them here. Please be aware that this might heavily reduce the functionality and appearance of our site. Changes will take effect once you reload the page.