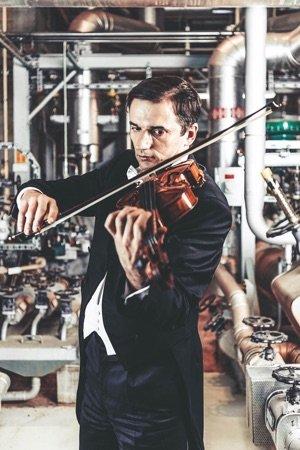 Ivan Vukčević – Professor of Viola at the International Menuhin Music Academy (since 2012); and Principal/Solo Viola with the Orchestra della Svizzera italiana (since 2002) – is an emerging advocate of the Viola as a notable solo instrument.

An avid proponent of the viola repertoire; Vukčević plays a rare and powerful 1753 Landolfi Viola, as well as a modern Viola built by Bissolotti in 1991. Vukčević’s ability to draw out regularly compelling interpretations has led to him having performed several new works in addition to the expected hallmarks of the viola lexicon.

Ivan has performed internationally throughout Europe, Australia, Asia and the Americas, and has made several recordings as well as premiering of number of new works; a testament to Vukčević’s commitment to raising the profile of the Viola for the next generation of musicians.

In 2008, Vukčević co-founded the Quartetto Energie Nove based in Lugano (Switzerland); an ensemble with a vision to match that of Vukčević’s own fierce musicality – having since recorded remarkably vibrant accounts of Prokofiev, Brahms, Janáček and Smetana for the Dynamic music label.

Vukčević’s teachers include the great Alberto Lysy and Johannes Eskaer (International Menuhin Academy), and he has previously occupied the Principal Viola chair with the Stavanger and Basel Symphony Orchestras. He has also had Principal positions with the Australian Youth Orchestra and Camerata Australia, as well as being a regular guest with the Singapore Symphony Orchestra.

Vukčević now is the Artistic Director of the Mediterranean Notes Music Festival in Tivat, Montenegro – which attracts some of the world’s finest soloists and chamber musicians – which features as the cultural highlight of the Montenegrin Summer.