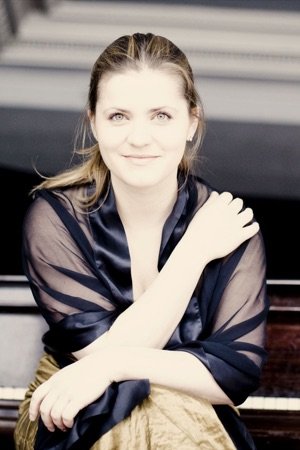 Lauma Skride’s playing is ‘wonderfully sensitive, with marvellous tone quality, and always with highly virtuosic vigour’, according to a review by the Bavarian Broadcasting Service. Combined with brilliant technique, these are the qualities with which Lauma Skride captivates audiences on major concert stages throughout the world, both as a soloist and chamber musician. Lauma Skride, who was awarded the Beethoven Ring in 2008, is highly acclaimed for her interpretations of Germanic classical and romantic repertoire.

Furthermore Skride performs in trio with Baiba Skride and Harriet Krijgh, as well as with Anastasia Kobekina and David Orlowsky in various venues across Germany and the Netherlands.

With the Skride Quartet, she performs in Germany and records their second disc featuring music by Enescu and Lekeu. A highly sought after chamber musician, Lauma Skride founded the ‘Skride Quartet’ together with her sister Baiba, Harriet Krijgh and Lise Berthaud in 2016. Since then, the quartet has performed in major venues and festivals including Concertgebouw Amsterdam, Wigmore Hall London, Schubertiade Hohenems, Liederhalle Stuttgart, Concertgebouw Brugge, Tanglewood Music Festival, etc. The Skride Quartet embarked on their first Australian tour in November 2019, in addition to a tour to the US in 2020 to venues such as Library of Congress Washington, Schubert Club St. Paul, etc. The quartet’s first CD featuring works by Mozart, Mahler and Brahms was released in 2019 under the Orfeo label.

Lauma Skride is also committed to the long established duo with her sister. Other chamber music partners of Lauma Skride include Anne-Sophie Mutter, Daniel Müller-Schott, Sol Gabetta and Julian Steckel, as well as Jörg Widmann, Christian Tetzlaff and the Armida Quartett.

Lauma Skride recorded Fanny Hensel’s piano cycle Das Jahr for Sony in 2007 and received an ECHO Classic Award as Best Young Artist for this recording. Together with Baiba in 2011 she recorded the transcription of Johannes Brahms’ Hungarian Dances for violin and piano by Joseph Joachim for ORFEO. In 2016 they released a CD with a pure Scandinavian repertoire.

Born in Riga, Latvia, in 1982, Lauma Skride is the youngest of three daughters in a musical family. She began playing the piano at the age of five and was later a pupil of Anita Paze at the Emils Darzins School of Music in Riga. She then studied under Volker Banfield at the University of Music and Theatre in Hamburg.