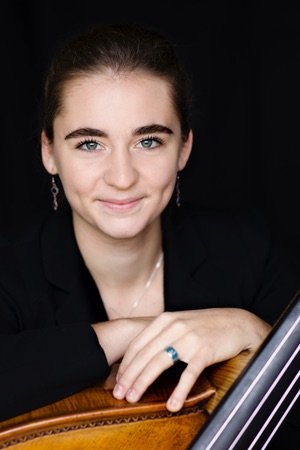 Valerie Schatz, born in 1997 in Wasserburg am Inn, received her first harp lessons at the age of 5.

At the age of 11, she dedicated herself to the double bass and began her training with Dominik Billinger. From 2010 to 2012 she attended the Mühldorf Music School with Claus Freudenstein.

In 2013, Valerie Schatz won the 1st Prize in the double bass category at the Jugend Musiziert competition and the Edgar Auer Special Prize. From 2014, the young double bassist was a permanent member of the “Junge Deutsche Philharmonie”.

In 2015, she moved to the Hochschule für Musik in Nuremberg to study with Professor Dorin Marc.

The young instrumentalist has worked as a substitute in the Munich Chamber Orchestra, with the Munich Philharmonic, the Bavarian State Opera and the Staatstheater am Gärtnerplatz.

At the age of 19, Valerie Schatz became a scholarship holder for 2 years in the Orchestra Academy of the Symphony Orchestra of the Bavarian Radio.

Since September 2021 she has been engaged in the orchestra of the Vienna State Opera and is a member of the of the Vienna Philharmonic Orchestra.